New Black Diamond Coal Mine – Mine Entrance Search Round Two

Two months ago I took a tour of the New Black Diamond Coal Mine (NBD) Industrial Complex site. Down next to the Maple Valley – Renton Highway it is scraped clean and there are no signs of where the offices, wash plant and tipple all stood. The only thing that remains is the concrete road that ran between the buildings. Really not much of a tour!

But up in the woods behind this flat barren area is a bunch of remnants of the mine. My first adventure up there I found this flat open area and what is left of the trestle that carried the coal from the mine to the processing plant.

At the time I did not know much about the layout of this upper area nor was I dressed to plow through brush to get to the mine entrance location. Here is a link to that first article about the NBD aka Indian Coal Mine.

Indian Coal Mine – Big and Messy

Wow what two months can do for a researcher! I have since received so much more information from Renton History Museum, Black Diamond Museum and Palmer Coking Coal Company. Most of this came when I was looking for a photo of Ben Jones to see if he was in the picture below with Tom Jones.

I have photos of both Tom & Ed but not Ben. So in that search folks would send me any info they had on the mine even if they could not answer the Ben vs Ed question. In the items that Bill K at Palmer sent me was a diagram explaining this back area of the mine complex. It mentioned that this plateau was for the coal car staging and repair. A car house was there towards the west side. Don’t think this is the small cement building that exists there today.  It is too small and is on the east side.

The stage is set now. Are you ready to travel with me to see what I found?  Let’s GO!

Got to the plateau and stopped to get orientated by the old timbers from the end of the trestle to the processing plant.

Got my clippers out and started up to where I found the trail along the creek bed that had formed a small ravine.

I came across a plant I can’t clip due to it’s size.  It is Devil’s Club & you do not want to touch or grab any part of this thing.  It is all spines, thorns and even the leaves are pokey.  I actually swept my hand against the leaf when I went by.  YIKES, what this Coal Mine Hunter does to get to her pot of coal.

Moving along I clipped my way thru the low bushes and came to a little area that looked down into the creek’s rocky gully.  Above me was a steep hill that someone had made a trail down & came to where I stood.

I seriously contemplated my next move. It was going to be a bit of a climb to get into the creek washed out bed. I knew I could do that but would I be able to get out? This area is beyond the spot I stopped at the first time I was here. It was blocked by a big and I mean big log. Here is a photo of that moment months ago.

Then I decided it was now or never. That I would not come back and I was prepared no matter what happened.  I would even climb over the damn log below if I had to get out that way instead of re-tracing my trail in.

Along the way I found this metal trim piece. Kind of reminded me of the stuff I found on the face of the Jones Slope Hoist Foundation I found.

Then I was there!!  It was the end of the rock washed out ravine blocked by a pile of old logs and dirt. I was finding non-natural items too.

Before I reveal what it looks like and show you the video here are some of the things I found.  (you can skip this & go straight to the video if you can’t wait)

Let us start with the concrete chunks.  Before I got to this point I was only seeing river rock but here there was quite a bit of cement.

This piece was up next to the log pile 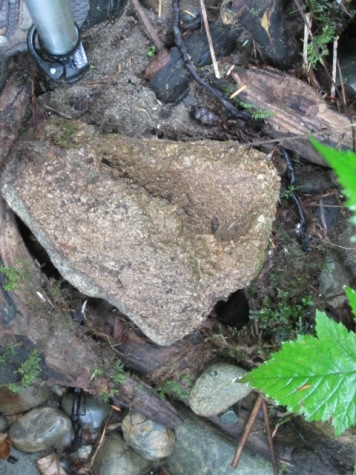 Before I got to the end of the trail I saw this piece of rebar.

Next we have cut timber pieces and a piece of asphalt. I was suspicious of the asphalt being from the mine.  I researched the history of asphalt figuring it was a recently developed for paving roads.  I was wrong.  It has been around a long time.  Here is a little quote from NAPA – National Asphalt Pavement Association.

In 1870, a Belgian chemist named Edmund J. DeSmedt laid the first true asphalt pavement in this country, a sand mix in front of the City Hall in Newark, New Jersey.  DeSmedt’s design was patterned after a natural asphalt pavement placed on a French highway in 1852.

Like I have mentioned before the State of Washington made sure that the urban coal mines are all closed.  And when I mean closed they are buried or blown closed with explosives. This one is no exception and protects all of us mine hunters from ourselves.  I have found a group online that do go into these old mines.  They have more balls than Batgirl!!

Here is a view looking back the way I had come up the creek bed.

See the wood debris and other man made items?  I saw this bag and blue cloth thinking homeless had camped here but a better explanation is it was washed down when the heavy rains hit this winter.

Behind this is a clay/sand bluff that is one of the clues to this being it.

And a close up of the materials used to close this mine tunnel.

Now that you have seen the photos and video I want you to look at the opening day photo.  See how the hill rises steeply behind the entrance?  I also note that the little buildings on either side photo below were probably on the banks of the creek washout ravine.  Those banks were about 2-4 feet high.  Water has done a number on the terrain along with the work done to close the mine.

This is the eighth article on the New Black Diamond Coal Mine. What a ride with so much information. I also want to thank those that helped me along the way -> Liz Stewart of Renton History Museum, Ken Jensen of Black Diamond Museum and Bill Kombol of Palmer Coking Coal Company.

I am going to move on to the next coal mine hunting adventure. It is not far from the NBD, just around a bend in the Cedar River and up on Cedar Mountain east of the Jones Slope Complex.

If you want to read more about my search for lost coal mines here is a link to my directory of articles.

Shoot me any questions or better yet any information you have to add. This is a never ending deep dig into 100 year old coal mine history.

Remember Times are a changing.  Blink and all will be changed.