This June I had a quite an adventure driving up to the Ghost town of Franklin. Franklin was a coal mine town established around 1885 when the railroad built by the Oregon Improvement Company finally reached the coal fields next to the Green River Gorge. The town has been gone for almost 100 years. A real ghost town to be explored.

I have so much material I am going to split it up into three pieces:

Franklin #10 Mine on the Green River & the Dipper sighting

Today it is all about the Green River and the first part of my investigation. The picture you see in the title is the river from the end of road I followed down to almost the water’s edge. When I left the parking lot, having paid my $5 fee, instead of going straight up the trail to the ghost town I took a path to the left.

This area sits on a bluff over the river where it is called a gorge, since it is so deep. There is a small private resort that for years  has charged for one to walk down a long trail with stairs to the bottom of the bluff.  I have a memory of the late 1960s, going there with my boyfriend Dale and some friends. It was a hot summer day then and we had so much fun.

Downward this trail (or old road) to the river it went. Check out this vista of the river about  half way down.

Next I came to where a cliff was on the right and the road dropped off.  One could scramble down to a small beach. I chose not to risk a fall with no one around and just admired the river.

The rock wall had some interesting graffiti. It was not the usual tag kind.  Check them out & see what I mean: 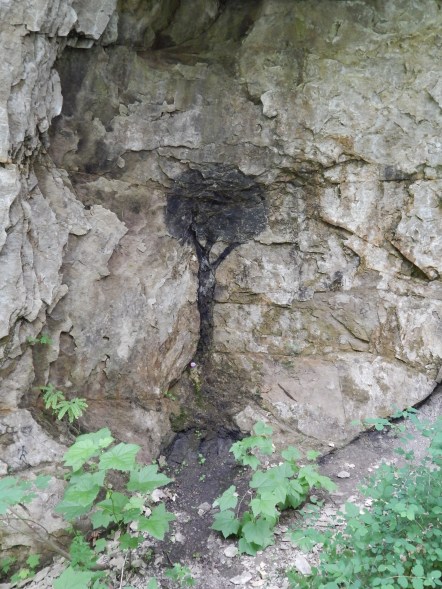 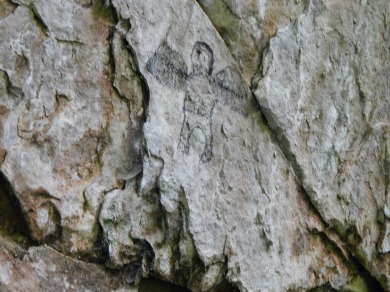 To further set the stage for you, I was standing there enjoying the river and wondering what the heck this place was. At the time I did not know a lot and thought the metal box in the river was just off a bulldozer or something.

Then I heard the bird on the river. He got my attention as he flew by and landed on a rock right in the middle of the river.

I have seen this bird only a few times. The first time was in the Ho Rainforest in the Olympic National Park. He is a short-tailed songbird related to the wrens, frequenting fast-flowing streams and able to swim, dive, and walk under water to feed. They like areas with cliffs and overhangs to nest and raise a family. Green River Gorge is a perfect place for them. It is pollution free and has a gravel bed that they like a lot.

So.. a dipper came into my life when I was least expecting it. Great way to start this adventure in my book.

OK – back to Coal mines and this ghost town thing. Remember how I thought the metal thing was from a bulldozer or other construction equipment? When I got home I did a bunch of research and I found this is a coal car.

It must have been there for more than 50 years. The mine was blown up and closed in 1971.  I need to do some more research on if this is #10 or #12 but either way here are some before and after photos for you to ponder.

I think this is the same place – see how the rocks look the same?  Then in 1971 it was blown up and gone forever.

There you go!!  The first episode of my Franklin Ghost Town Hike.  Come back for more next week.

2 thoughts on “Franklin Coal Mine on Green River”