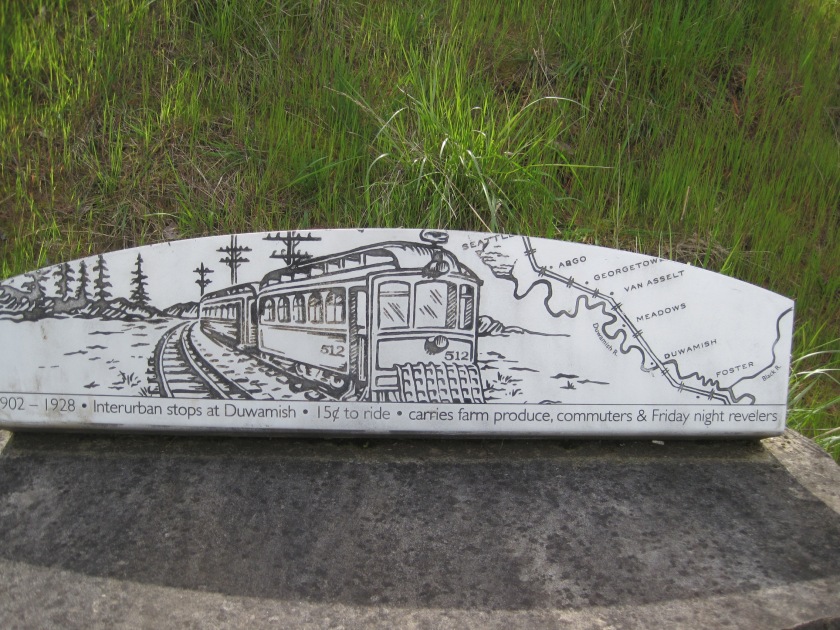 How does a place disappear? Well a small community of Duwamish has done just that. It is still a name on the map but very few homes still exist and the famous Interurban Railway that stopped there is only a memory too.

There are remnants of the rail bridge though. They are two sets of cement pillars on opposite sides of the Duwamish/Green River right where Duwamish used to be.

Most of us don’t remember or know what these little monoliths are there for.  Easy to think they must be some car bridge since there are two modern bridges to the west of this spot.

Then there is this rectangle of cement next to the road. My imagination goes wild when I see it. Was this a station for the railroad? Was it an old gas station? Was it an old house or store from the small place called Duwamish?  I like to think it is related to the rails. Perhaps someone will read this that knows.

Lets go back in time to imagine another time and place. Back in 1912, private interurban lines connected Tacoma, Seattle, and Everett. The advent of the car had not made it to the masses. Even the rich had issues traveling the poor roads and a fatal accident happened not far up the river from where the old rail crossed the river. But then like a lot of good things the Seattle-Tacoma service ended in 1928 with the opening of Highway 99.

This particular crossing is close to a special place for the local American Indians. It is a small hill that was formed by glaciers. The Hill is associated with the southern Puget Sound Salish oral tradition in the stories collectively known as the “Epic of the Winds”.  Article telling full story

How is one to know how special a place is? A river, a hill, an old crossing, a community gone. The city of Tukwila has developed two parks. One is the Duwamish Hill with benches that tell the story of its history of the rail and of the spiritual nature of the place. Thus they have memorized it for us to never forget.

I bring you back to now. Just to the west of the old pilings is a car bridge and the new Lightrail bridge over the Duwamish.

The old Carosino farm has now been restored to harbor salmon, birds and bring some of the old river back to us.

How appropriate that the new rail crosses the river not far from where the original did. Time intersects here with the distant past in many ways. Even the building of the rail bridge stumbled upon an old native fishing site. That has been buried and protected now. It is a place where as I stood the train rumbled over head.