At the Longacres Racetrack ruins there is an artifact still standing. It is the wall that separated the roaring crowd from the thundering hooves of the track. It was painted green to match the hedges that were neatly maintained along the track and had a metal rail on top of it.  That rail is gone but the cement part is alive and well. This is a Google map snip showing the distance it covers between two arrows.  It also will give you a good view of the entire Longacres Racetrack ruins.

Today over 20 years after all the buildings were razed, this wall still stands commemorating the thrill many had at this site. When I first saw it I was amazed by how it had survived the years despite the moss, trees, and brambles that have overgrown it. Little did I know as I followed it from North to South I would encounter almost 1,000 feet of it. It has only one large gap where Boeing pushed a maintenance road and path through it. Join me in going down memory lane as we walk along. Think of the sounds and emotions that have sunk into its concrete over the 60 years of house racing it saw.

Here is the very northern end of the wall. It has some electrical and post hanging on it that must have been night lights. Below the picture is a photo sent to me by Bill Taylor when I started my Longacres documentation.  He got it from Doug Clark of Four Footed Fotos, who has been the track photographer at Longacres, Churchill Downs and many other well-known tracks.

Now imagine how the grandstands you see in this photo are gone. Nature has grown up and around all the concrete. This next series of photos is what it looks like today if you were standing on the spectator side. 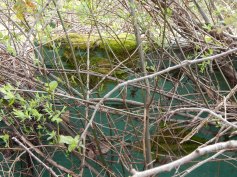 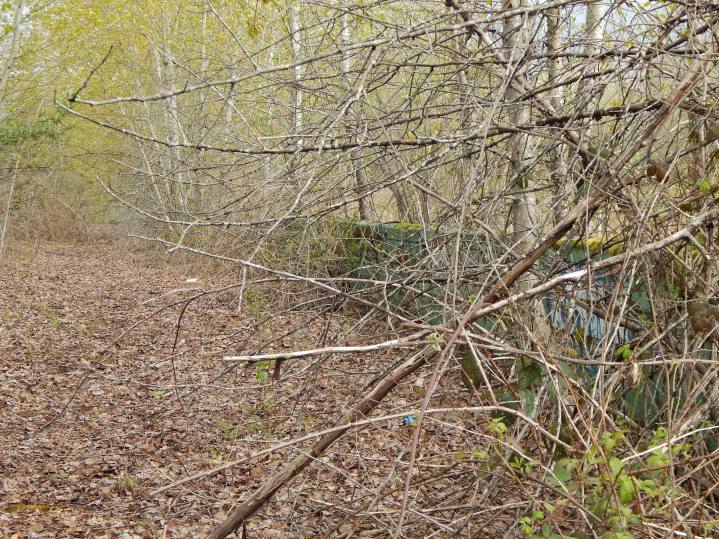 North Grandstand side – ruins of Longacres view of green wall

After I walked around the north end I traveled down the actual racetrack. That was when I got goosebumps. Imagine the years of horses and jockeys parading, racing and breathing on this piece of ground. Today in 2016 the green wall marks that something special existed here.

Where that red netting in the distance is marks the middle of the complex. That is where the original grandstand, Club House and Jockey House stood. Boeing has pushed a maintenance road through this area. Along side of that road is a lighted path for employees to get to the Light Rail Station. You saw that in “The Foundations” post as it crossed the north end of the original buildings.

Near there is where I found that gate still attached to the wall. I have looked at a lot of photos online but cannot quite put my finger on what this was. Any help would be appreciated.

Tina who I met on my second visit showed me how to duck under the netting and a little way to the south I found what I think is where the finish line was. If I have this correct it is where the original grandstand met the Club house. From examining the foundations this gap in the wall makes me think it is the place.

Around this area the homeless or partying have left their mark. A huge concrete block that must have been a light standard has a bike helmet and other items strewn about. This also shows you how the Light Rail Station is in the distance.

To get your imagination going more, here is a snapshot of cement flooring on the grandstand side of the wall. This was where many cheered, cried and threw down their losing bet tickets.

Moving along there is a rather large graffiti piece that was left in the last year or two.

This next section I think it is just crumbling and knocked over from the trees but it also has the look of being cut out like this.

Another oddity in the wall is this opening with a curb type structure. This is close to the Club House best I can determine.

As we passed through this area on the track side Tina’s dog lunged toward an opening in the wall. It was a small garter snake who was not happy with him. What I find interesting of this shot of the snake is the round cement structure on the wall with an iron bar coming out.  What is that?

This brings us to the southern end. As I stated in the Foundations section the Jockey House has a pair of large poplar trees to mark its southern end. This was helpful when trying to figure out where things were.  Here is a photo of them with a construction crane, the Light Rail Station and of course the green wall.

Off the right of this area (north for those keeping track) is this strange opening with protection on the two ends.  I don’t think this was done by Boeing during the demolition but I imagine it was to protect the horses and jockeys as they passed through the gap.

As we get closer to the end of the run the small poplar sucker trees dissipate and it is more of an  open field.  This first picture below you can see those small trees clustered around the wall.  In the second photo it may not have trees but it does have a big blackberry bush brier.  See how there is concrete here on the non-track side this photo is taken from. Two landmarks in these photos; one is the bird platform built for nesting osprey and the other is a reddish tree. The red tree is about the end of the wall.

And you knew this was coming… the end of the wall.  Hope you enjoyed your 1,000 feet of green wall.

Now it is time to jump the wall and  move to the all important track itself. This is where the action took place. I would say about half of it still exists in some form or other if you look at the aerial photo at the top of this post.   You can find The Track here – Ruins of Longacres – The Track.

For those that stumbled upon the Wall first here is a link to The Foundations Longacres Ruins – The Foundations.  Then there is the first post that started all this, my post on the old entrance units under the freeway – Longacres Relics