Duwamish and Port of Seattle T-5

The view of Port of Seattle Terminal 5 from the viewing tower at Jack Block Park shows how large this property is. It is empty of traffic for a remodel of the docks to accommodate larger ocean-going container ships.

Security around this facility is tight.  Here is a post I did several weeks ago about the shake down they did on me at the southeast entrance. From that side of the terminal I also got some good photos of the old red cranes that are synonyms with the Port of Seattle.  Terminal 5 Trouble

Everywhere I went in the Park which is owned and maintained by the Port of Seattle fencing was tight. No holes or even cracks are in them.  This is unlike other areas I traversed on the Duwamish. They are on alert since the environmentalist had a serious demonstration around the Shell Oil Drill Rig Polar Pioneer that was docked here. I will let my crow helpers show you a little bit about the fencing.

Let us talk about razor wire and fencing!  The Port used it with no thought of expense.

One thing I found interesting is how much I could see from the viewing tower of the terminal. Funny how this is feature was Port built so the public can see the city and bay. All one has to do is turn around and there is a panoramic view of their business they are trying so hard to hide. This next series of photos really gives you the lay of the land.

There are three ships docked currently at Terminal 5.  In my prior post you might remember seeing a photo of them.

This trip I was able to get better photos of them. They are from north to south on the dock – Ross Chouest, NANUQ and AIVIQ. The AIVIQ had some nasty business up in Alaska in 2014. The Kulluk a Shell Oil Drilling Rig was grounded after the AIVIQ lost control of it in tow. Here are a few articles about this wreak and how the Coast Guard was not happy with Shell and Edison Chouest, the owner of the AIVIQ.

USCG and Shell around tow of Kulluk Oil Rig 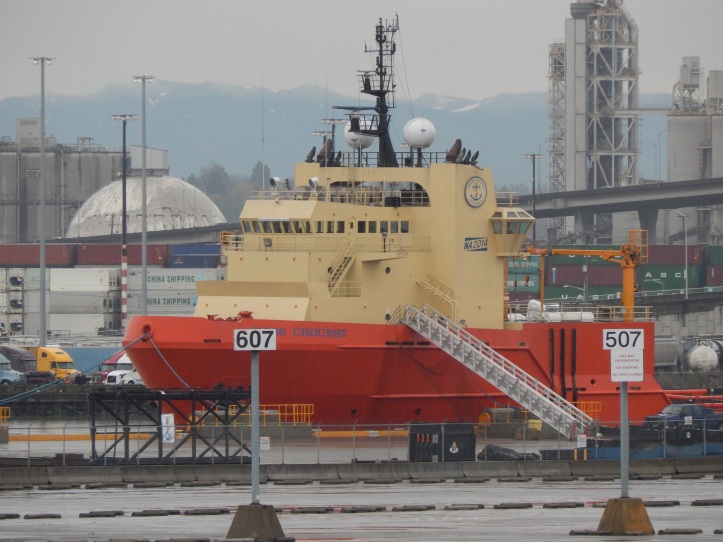 My quest to walk the Duwamish has been full of things like T-5 where industry has control of our river. We the public benefit from the commercial use of the Duwamish but not all of the companies have been good stewards.

The Port of Seattle has done a lot of work to clean up other people’s messes. Jack Block Park sits on top of one of those areas. So, I shouldn’t be too unkind to them for wanting to beat out a buck and lease the dock temporarily for ships that are involved in drilling oil. It is a conundrum of our times. We want to use our fossil fuel cars but do not want to own up to our part in the extraction of oil.