The Duwamish River has mystery around it.   There is a conundrum of industry and nature along its banks.  Please go with me on an adventure trekking the length of her.  We will start at a place I consider her transformation from the Green River to the Duwamish.  This place has a large rock at low tide and at one time my senses tell me it was the end of large vessel navigation.

Along the way I learned more about how the River was straightened.  With a few maps I realized that there are several remnants of the old river.  They appear to be places to park boats but in reality they are where the river bends intersected the man-made channel.  Here are two pictures I found that show this. 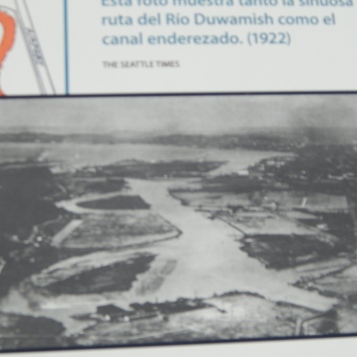 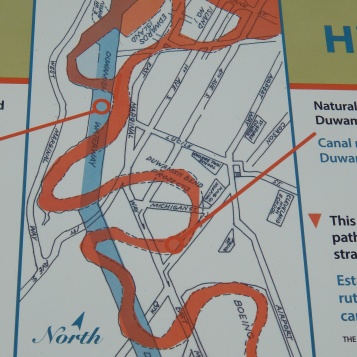 Here is a listing of my blog posts.  As I traverse the only river in Seattle I will add to this list, so do come back to use this as a guide.  Do be kind to the river and then she will be kind to you!   Join in her revitalization by joining any of the groups helping restore her glory.

This is the kickoff post of my adventure.  It traverses the river from the Cecil Moses Park to the south side of Turning Basin #3.  You will see some hidden stairs, the back of the USPS center, Oxbow Boeing bridge and walking trail plus my getting stuck in the muck.

This last couple of weeks I walked several times from the Turning Basin #3 up through Southpark to the 14th Avenue South Bridge.  I was struck by the mixture of use the river has on it.  The Green River Trail was mostly natural with a splattering of warehouses and homes.  The Duwamish is so different.  Check out the spectacular yachts right next to those less fortunate.

Got your attention!  This article is not about the river being live with electricity but rather about a City Light substation wedged between the river and freeway.  Remember how I stated I had to be inventive on my quest to get to the river bank?  This article not only will show you the massive wires and transformers but also how I got to the bank.

As I traipsed along the river I collected a collection of photos of the mixed use the river has.  This article gives you a glimpse of that variety. In some places I only could get a glimpse of the river but then others I gloried in her nearness.

The Duwamish River has had a bridge at 14th Avenue South for many years.  Recently, the old one was closed due to disrepair.  After a lot of politics the money was raised to build a new bridge. On my walk along the river, I came upon this lovely new bridge and a well designed and informative park built under and around it.

When I walk I often find fun things that I have to share.  This chapter is more about the town of Southpark and some quirky things found while seeking out the river bank.

In Southpark at 12th Avenue South and Elmgrove one can stumble upon this mirror cube and the illusions of the river.

A bridge was built over the newly straightened Duwamish in 1914 and this Duwamish Revealed Art installation commemorates that site.  It also points out the pump house for the Georgetown Steam Plant that saved it when the river’s course was re-directed.

Check out what the bridge looks like under the roadway and next to the Duwamish river with a 360 degree video.

This post will round out my investigation of Southpark’s Duwamish River Bank by showing you some of the varied sights I encountered.  This ranges from cranes, houses, warehouses, and of course the river.  Add a few surprises in there too!

Went to the small neglected park on the west side of the Duwamish end of 8th Avenue. Photos of the pump house and gritty park where the bridge over 100 years ago crossed the river.

This is the north side of the bridge where a small neglected park harbors some of our neglected citizens.

Follow West Marginal Way between the forested bank and industry.  One cannot follow the river bank in this section due to the security these industrial endeavors have. (rightfully so do they protect cargo)

Everywhere I go I meet Crow Families.  This one is making its way in a shipping container maintenance and storage yard next to the Duwamish.

The southern end of Kellogg Island which was part of Edwards Island before the river was dredged.  Also a view of the West Seattle Bridge and Seattle.

More views including the West bank, north tip and how industry surrounds this last wild piece of the river.

Up on the Duwamish Trail path you will see the longhouse with a Chief Seattle sign.  Then along came a train so close and loud I had to take a video of it.

Found this little marker from 1996 when the park didn’t exist or wasn’t very developed.  It is now off the beaten path since the usable areas are to the north of it.  I challenge you to find this marker too.

Long post all about my recent visit to these two parks along the Duwamish River.  Lot to see and experience.  History, birds, boats, homeless, and THE River!

To the south of the West Seattle Bridge is this 1928 railroad bridge.  The Duwamish continues to hold history for those that seek it.

Two sculptures installed during the 2015 Duwamish Revealed at the T-105 Park owned by the Port of Seattle.

1995 was the year the Port decided to develop this small park so the public could have access to the Duwamish River.

Video of train working along the Duwamish  – Duwamish Adventure – Chapter 24

Took this little train video outside the gate of T-105.  Look for the Engineer waving back at me.

Follow my meandering around this old community next to the West Seattle Bridge.

Talk about trouble – my day around security at Terminal 5 how I had to delete a photo.

A maze of concrete bridges and some history too.

A look at the very north end of the Duwamish River before it flows into Elliott Bay.  A tug video shows how narrow it is.

Some good and some sad things around the intersection of Harbor Avenue and Spokane Street.

Get some good views of the big area Terminal 5. See a few ships docked there and understand the security in place there.

The murder here at the north end of the Port of Seattle’s T-5 recognized me and we had a little play time together.

Wander around the park and see how it is a combination of green park, beach, view tower and old remnants of industry of old.

Here I go off trail to attempt to get to the river mouth. Who will win? Me? or the Port of Seattle?

Our only River – The Duwamish – Duwamish Adventure – Final Chapter

This is the finale of My Duwamish Adventure. Enjoy a short video of the river’s mouth and how I encourage everyone to get out and walk without your technology. Enjoy the serendipity of life!

Hope you enjoy my adventure.

Check out the Green River Trail Quest series of posts.  You will find it a combination of history, nature and man-made finds that follows this trail from beginning in Seattle to south Kent.