My Duwamish Adventure has continued in the last couple of weeks.  I am now to the north of the Green River end/beginning point.  This has not been near as easy as walking the Green River Trail.  I have had to investigate areas that are not developed, walk around industry and be rather adventurous to get to the river bank. My last two trips have yielded a lot of material so I am going to divide it up by topics rather than a plain old time line.  This will give you a good feel for all the diversity of terrain I have found while still working our way north.

This article is about how I found there are two sides to the track (or river).  My Duwamish Adventure Begins posting touched on this with a picture of the spectacular ship being built at Delta Marine.  I now know its name is “Albatross”.  While getting closer to the shipyard I captured a wide range of eclectic yachts, barges and boats on the water.

First lets look at Delta Marine and some high-end ships only the rich could afford. On Delta’s website they state they began as a builder of fishing boats but now concentrate on private yachts.  The fishing industry is not as lucrative so they morphed into a new product to survive. 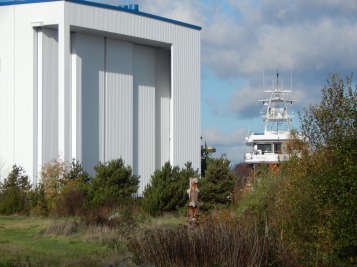 Look close at the feature image at the top.  You will see on the left the yacht Albatross and on the right a fishing boat pulling in their nets.  In the middle is a barge with a crane, some manufacturing buildings that I assume are Boeing related and an old water tower.

Let us continue to the other side of the tracks (river).  Just to the north of the Green River trail head is a small park that holds junk from a homeless encampment and/or a little party time.  While ducking into the river brush I also saw a pair of Stellar Jays dancing around in the branches. I swear I saw a white belly of a Western Scrub Jay but only captured this guy.

Junk left behind on Duwamish by partiers and homeless 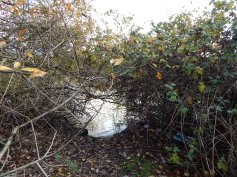 Trash in the river brush

Blue Jay in the brush by homeless debris.

As I walked along the perimeter road in a small trail behind the guard rail, I came upon a place where two RVs had parked.  Last time I was here they were still there and I ended my day’s hike to the south of them.  They have been evicted by the police now.  I know this because a friend of mine told me she saw it happening on the way to work one day.  They left a bit of trash behind. 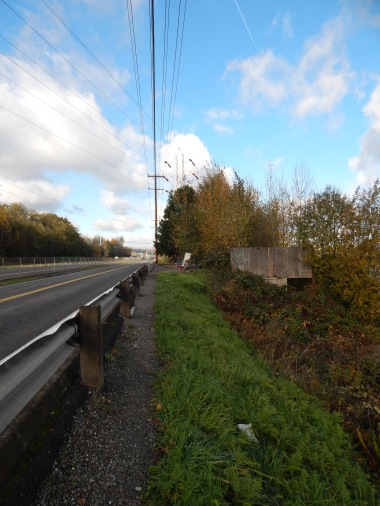 The Duwamish has long been a place for all.  Years ago the Duwamish tribe made it their home and harvested the bounty of the natural river.  Then modern man came to town and built his industry alongside mother nature.  Some of us have been rewarded well in this world and some are falling behind.  The river showed us this today.