Despite the odds of growing up next to a busy freeway, high voltage power lines, a cell phone tower and a large clutch, the three Osprey babies have flown out of the nest.  In this picture below you can see two of the chicks on a pole, a parent or baby on the cell tower and if you look close another osprey on the very top of the tower.

Over the last couple of days each morning and evening drive home I would stop by and take a few pictures.  Here is the parent flying over me to make sure I am not going to cause the babies harm.

One of the babies sat on the nest cam post not really sure what to do next.

Step back a little and the next picture shows how the camera got a direct poop shot.  The picture we watched for the last couple of weeks was hazy but one could still tell what they were up to.

As the nest got full of big babies, the cell tower next door became a popular place to perch and watch the brood. 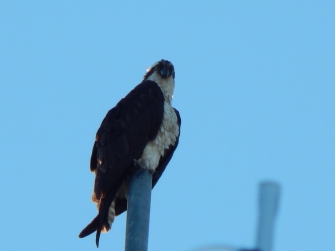 Parent is watching me

I leave you with a picture and video of their world.   The video is more about the sounds it brings than the picture.  Listen to the roar of the freeway off to the left of the picture.  Above that din the parent Osprey chirps to the children.  It is high-pitched and not what you expect in a bird sound but that is the osprey way.

What an adventure & many thank yous to Mr. Racks for hosting the nest camera.