This week’s Green River Trail adventure took me under many bridges that span the river at Southcenter.  Starting just south of Fort Dent where I had left off my last trail walk, I wove my way to 180th and back north on the Interurban trail.

This section of the trail gives one the most unique view of bridge after bridge from an angle you never see from your moving car.  It is a meeting of nature and highways.  Hence – Nature Bridged.

The beginning of my walk today was through an area where at least 4 bridges cross the Green River.  This first picture shows Hwy 181 or West Valley Hwy/Interurban.  Check out the other bridge in the distance.

Next comes ramps to I-405 and Southcenter Blvd.

When you emerge from under that bridge there was I-405 rumbling by on its bridge.

Hanging in the brush is a remnant of an old car wreck.  Did this just get thrown off the bridge or did the whole car come over?

A reminder that bicycle traffic is brisk on the trail.  I was in the minority walking and had to watch my back all the time.  No one tickled a bell at me the whole time, but then I walk on the left so I can see who is coming.  Then the bike traffic going my way doesn’t run over me either.

I round the next bend and came upon old pilings in the river surrounded by hotels.  There is a historical marker there that tells us what they are but alas someone ripped off the informational plate.  Dang!  Does anyone know what these are?  note: I did more research and found this is Nelson Landing. The farmhouse is still there on West Valley and is a protected trust historical site. Those pilings are the boat landing before freeways.  Mystery solved buts sad the plaque was stolen.

After a bit of walking along, I came to Strander Blvd and it’s bridge.  Under we went.

The best bridge was the old railroad trestle.  It was the oldest by far and looked to still be in use.  I got another view of it on my return trip.  I walked back on the Interurban trail which is on the other side of the river and follows the route of the old Interurban rails and the modern railroad tracks.  These tracks are the main lines out of Seattle. 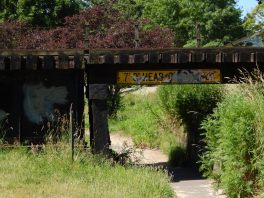 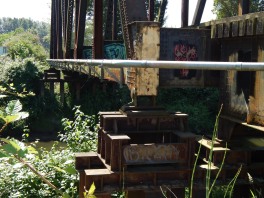 Lastly came the 180th South Bridge which meets up with West Valley Highway.

From here I hiked back to the car along the Interurban Trail.  Not as nearly pretty but I did see a mother Downy Woodpecker feed her baby.

And the adventure ended with another bridge.  Not as pretty as all the Green River bridges. Hope you enjoyed the under belly of bridges from the trails.