My adventures along the Green River Trail took me to where the Black River flows into the Duwamish/Green River.  Unfortunately the Black River is really just a stream. 100 years ago mankind seriously messed with this river basin.

Here is a clip from Wikipedia on the Black River and how the White, Green, Cedar and Black all joined into the Duwamish.

The Black River is a tributary of the Duwamish River in King County in the U.S. state of Washington. It drained Lake Washington until 1916, when the opening of the Lake Washington Ship Canal lowered the lake, causing part of the Black River to dry up. It still exists as a dammed stream about 2 miles (3.2 km) long.

The Duwamish people lived along the Black River for many centuries. Duwamish settlements remained along the river until it dried up in 1916. Several indigenous villages were located near the confluence of the Black and Duwamish rivers. The area was called “Inside Place” (Lushootseed: Dxwdəw, from which comes the word “Duwamish”), referring to its location inland from Puget Sound. Long used as a place of refuge, the area became home to many natives displaced by the growing city of Seattle, until the Black River dried up.

Kenworth watches the river flow by 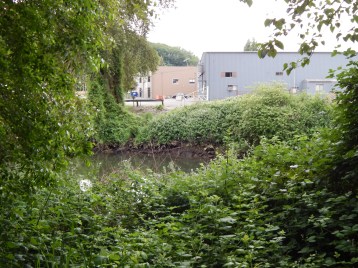 Nature vs Industry along the Green River 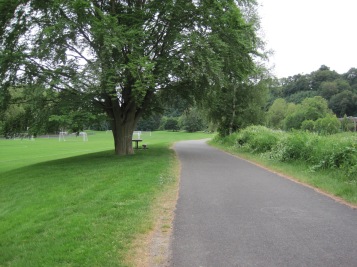 As you can see from the pictures, Fort Dent is now a well-groomed park.   It is the home of the Seattle Sounders and has many sports fields for use and even a small stadium. The history of Fort Dent is it was built around 1856 after the Indian Wars. It was basically a blockhouse for settlers in the area to flee to.  It was built near the confluence of the Black and Duwamish/Green Rivers because if its ease of access and abundant food.

Before that the Native Americans referred to the site as Mox la Push or river with two mouths. They had villages here for centuries.  In my mind I tried to picture the vibration of this land.  With it being habituated for so long one would feel it had special spirits to watch over it.  I couldn’t get there though because man had changed it so much and used the river in our modern way.

I was now under the railroad trestles that cross the remnants of the Black River.  One of them dated way back to that other time and the other was more modern.  Modern meaning in the last 50 years.

Then I turned and saw the brand new graffiti.  It was bright and bold.  It still had that fresh paint smell and the spray paint can lids scattered.

This bright display was to my right as I passed under the bridge.  To my left an older display was trying to hold onto its glory next to the dazzling new.

Lastly, on this other side of the tracks you can see the river below old bridge piers and a shot of a crow on a pedestrian bridge.  That small people bridge looks like it is about to fall down but I am sure the graffiti artists have tried to balance on it.

This all shows that you never know what you will find if you just look off the beaten track and across the tracks.