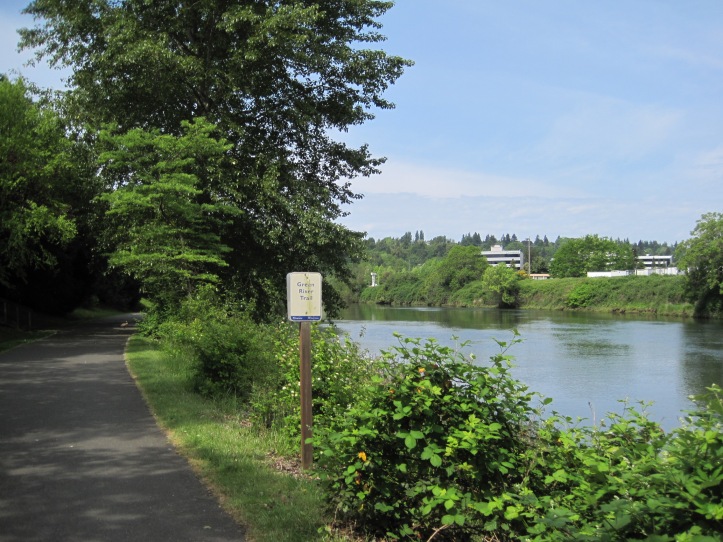 There have been many bridges in this area over the years and this trail gave me some shots of both old and new.   Well, the old are just pilings but you will see what I mean.

The featured image at the top is looking south from a small pedestrian bridge that goes to Allentown.  It has the current bridge in its view, however, look closely for a little island.  That is all that is left of one of the first bridges built here – the Riverton Draw Bridge.  On Historylink.org, they talk about how this existed from 1903 until it was demolished in 1927.   This bridge was originally built for people and horse carriages.  Soon after it was built it started transporting automobiles.  The west side had a very dangerous approach that crossed the Interurban train tracks.  Several fatal accidents occurred there.  Here are two pictures of the bridge I was standing on and the north view.

Continuing to the north around this bend, is where you will see a new bridge for cars, the Light rail bridge, pilings from some other old bridge or dock and dual bridge towers from what I think is the Interurban Train’s bridge.  I can’t confirm that anywhere but it seems to be about the right place for it.

Next you can see the old farm-house that is boarded up because of the newer Light rail system that goes by it.  That concrete bridge is the Light Rail raised track.

Next you can see the Hwy 99 bridge with Boeing Office Building in the distance.

In this photo of crow post sitting you can see the footbridge that crosses back over the river to the park where I parked.

Every trail head has a prankster and see what I found.   A little blue guy waving goodbye to you.