The Hunt for Trilliums

Third year in a row I have gone to my favorite Trillium patches to document their spring sprouting.  Today in the pouring rain I made my pilgrimage to the forest.  My hunt was successful as you can see.

I went back to the prior two posts (see the links below) and from their timing, it appears they bloomed early by a week or two.  Not a surprise since Seattle has had a dry warm winter. Go look at these two posts when you get a moment. I think you will see that the patch pictured as the feature photo above shows how sparse the flowers are this year. That must be from the dryness.  At least I hope that is the case.

http://wp.me/p1d1cX-C6 – the video is of the patch above.  Sure looks a lot thinner from two years ago.

http://wp.me/p1d1cX-NG – this is 2014 and highlights the same patch in the photo gallery below.

They could also be thinner because someone picked them last year.  Trilliums do not like to be picked.  Here is a little quote from Wikipedia on what happens when they are taken home to a vase.  Some states it is illegal.

Picking parts off of a trillium plant can kill it even if the rhizome is left undisturbed. Some species of trillium are listed as threatened or endangered and collecting these species may be illegal. Laws in some jurisdictions may restrict the commercial exploitation of trilliums and prohibit collection without the landowner’s permission. In the US states of Michigan and Minnesota it is illegal to pick trilliums. In New York it is illegal to pick the red trillium.

I also love one of their folk names – Wake Robin.   They and the Robin birds are both creatures that bring us spring. 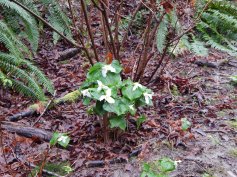 They are back!! Trilliums along the trail