Down around the corner from the beach I frequent, the city had a new piece of land donated by the Bullitt family (former owners and founders of KING Broadcasting).  They gave 5.7 acres to the Arroyos Green Space. It has a sculpture installed called “Illusion Dweller” that is made of stainless steel and commissioned by Gerry Tsutakawa. It is actually to the North of the house they built down here many years ago.

I saw an article in the West Seattle Blog this week and decided I had to walk down there to see what it was all about. Below is a short video of my approach by land which for most folks isn’t an option. As the blog states the only way to see it is by water and boat.

After I took my pictures I walked back on the tideflats to our beach further to the south. I ran into a friend who is repairing his waterfront area damaged by the December storms. He has lived in this area for many years and told me a little about Stimson Bullitt’s tussle with the city to get the house built.

He said that the house they built at the end of the road south of the donated land was not an easy endeavor. The city threw lots of roadblocks in the way. The Bullitts had to pay to have all the water, sewer and power laid in underground. But the best piece is the turnaround he built so a fire truck could get turned. It is a cement platform on tall posts hanging out over the bluff. I thought it was just a parking space but now we know the full story.

Stimson was a leader in our community and active into his 80s. He was proud that he was on “Nixon’s Enemy’s List” from his protests of the Vietnam War. A man after my heart. Here is his Obit with some more details. 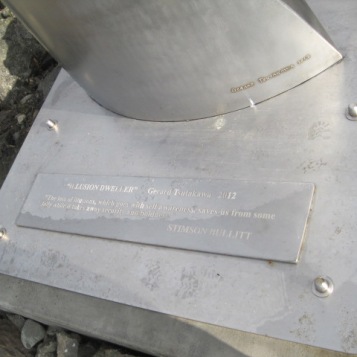 Close up of Illusion Dweller 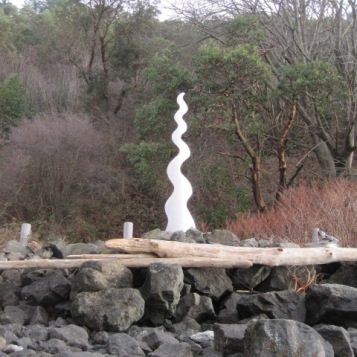 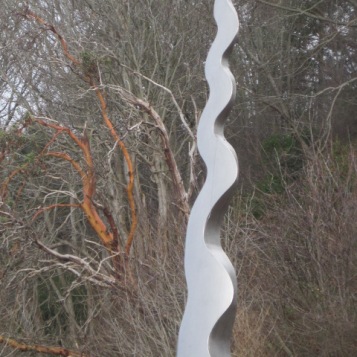 closeup with woods behind

Looking back at the sculpture 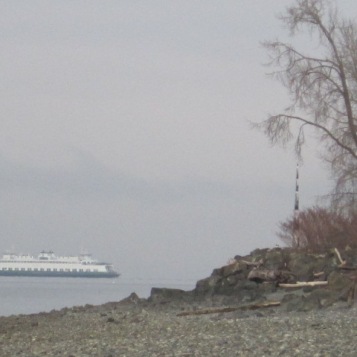 Illusion Dweller on Right and Ferry to Vashion on the Left